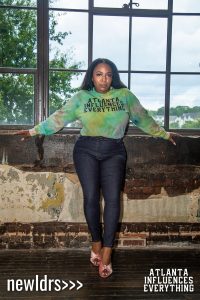 “What I’m grateful for is each time I’ve had a little dream, I’ve just gone with it and it turned into something incredible.” – Archel Bernard

This year has claimed many small businesses across the country. Most business owners are holding onto what they have with extra precaution after COVID-19 has made it difficult for many businesses to thrive. However, creative entrepreneurs such as Archel Bernard are among the outliers that see no boundaries in the opportunities she can create despite the circumstances.

“Here’s a chance to do well and create features of meaningful work and opportunities for more people.… I’m looking forward.”

A true leader is one that paves a way for others to follow, but despite being named an AIE New Leader, Archel has been creating a way for others for a long time. She opened Mango Rags in Monrovia, Liberia in 2013 after a successful Kickstarter where she is no stranger to aiding others amid tragedy. Archel has employed women who were stigmatized due to being Ebola survivors, rape victims and deaf and gave them new hope of what their futures can look like. Her mission is to help each individual to become self-sufficient through skill-training and education.

Archel’s mission should come as no surprise after a diverse childhood where her Southern family roots coupled with her Liberian heritage kept her grounded in tradition. That naturally translated into her fashion as she began creating the clothes she wished to wear while working as on-air talent. Although she didn’t see immediate success as an on-air personality, she noticed a demand for her clothes and she began to create more of the looks that people enjoyed for income.

“Sometimes you may not know where your strengths may lie or what way you’ll use your strengths for,” said Archel as she discussed her transition from media to fashion. Her talents came full circle in 2011 as social media rose in popularity and allotted her the opportunity to utilize her previously overlooked media skills in collaboration with her colorful Liberian fashion.

As AIE has had the opportunity to collaborate with Archel, we recognize the passion in her work that creates an extension of herself to those she aims to collaborate with. Even her learning the art of tie dying was a lesson taught at her shop in Liberia.

“I also recognize I don’t know everything so it makes me excited to pull other people in to do other things as well.”

Her ability to nurture relationships throughout her career has brought her many opportunities to work with Essence at NYFW where she brings light to sustainable ethical fashion. With such an open heart and spirit there’s no doubt how she has caught the attention of major publications such as Forbes, New York Times, and Fast Company to name a few. However, sustainability is not a trend to her. She described it in her own words as she stated, “I think in Liberia… because Liberia is such a poor country. We always emphasized sustainability in all things. For us, it’s not a new thing. That’s been the way of life. It’s just about being able to share that.”

Archel’s Atlanta location Bombchel, opened its doors on October 7th in Ponce City Market creating a beautiful space where collaboration is the key. A reminder that we are strongest while working alongside one another. It is a space to bring light to the work that she does and the people that she helps.

When asked what she hopes to see in the future, the excitement beamed through as she said, “I would like other locations in other cities. Now I have a store in both cities that I’m from. I want this to become an Atlanta staple. There’s an opportunity for so many other collaborations. I want more collaborations! How can I help more people of color get exposed to more shops like this… or more brands… or more clients? On both sides. I want people of color to see themselves in the retail that they’re buying and I want more designers of color to have access to the clients they wouldn’t have had access to before.”

The excitement is felt and that energy is needed because as she stated herself, “everyone can sense that it’s something bigger.” As her company grows, she’ll need the help of our community. Make sure to check her out at Ponce City Market and shop Bombchel!!

If you are interested in being a featured fashion designer, jewelry, or quality natural products vendor or interested in working as a sales associate, please email Archel at itsarchel@gmail.com with your information and interest.