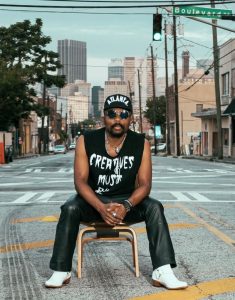 Photos by:
Words by: Yamileth Jaramillo

I hate creatives. I do. I like the creators! I think with the creatives, it’s creating this narrative that you can just put on a black t-shirt and black jeans and that’s the extent of your responsibility as a creator. It’s becoming more trendy and I think it’s because it’s something that seems accessible to ppl. When it really is not accessible to ppl. That’s what people don’t understand. There is a lot of work that goes into becoming a creative mind. It’s a lot of practice and before I give myself a title I would want to do the work. For instance, like a doctor.You don’t just say “I’m a surgeon.” They go through years and years of training and in that training they get that title. The term itself skips steps. With something so serious in this window of time where the possibilities are so endless… I think at this point it is where responsibility as a creator becomes ever more important. You can’t just skip those steps. When those doors get open, and they do get opened… you get a chance… and see you’re not equipped. You only came in to get a title with no skills whatsoever. You just came in with a title. Children are the best creative. They are! They’re in their minds all day long. They can come up with 1M ways to play with a stick. That just goes to show you that, at the end of the day the creative mind, that’s some inherent shit for ppl, period. Human beings are given the whole concept of curiosity. It’s innate in human beings. My friends are always talking about creatives, and I look at some of them… and I’m like na. I’m not saying all of them, but like I have a handful of friends that are creators and they do real shit and they work really hard. Then I got my other friends who are creatives and they don’t do shit, but sit around and pontificate on what it would be like to see something in grey and yellow. To me that’s not creation. Everyone can have their own types and that’s cool. I don’t hate creatives. That’s something the young cats use to hold them over. I’m cool with it, but I still believe in OGs and youngbloods. The only problem with having OGs is that OGs are haters.  They understand because they lived it, but they turned the understanding off.